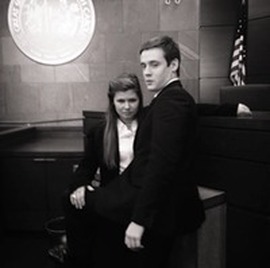 Andrea Herman is a senior from St. Louis, Missouri studying French and International Comparative Studies. She participated in her high school’s mock trial program and has been competing on Duke’s team since her freshman year. Although she has won awards as an attorney, the biggest strength she brings to the team is her portrayal of “obnoxious and unlikeable” Franco-German madam-type witnesses.

With her attraction toward “so cute, so successful” knife-wielding robbers and unintelligible and unidentifiable accent, she is usually guilty but never convicted. When not participating in mock trial, Andrea enjoys gossipping with Billy and being woefully sarcastic with Heather. She is also plotting a massive usurpation of mock trial power, but don’t tell Billy.