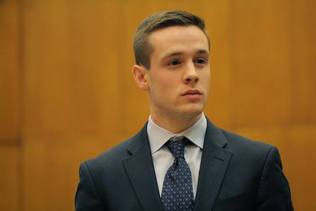 Billy is a senior from Stamford, Connecticut who until now has never had a bio on this website. This omission was all part of his scheme to assume power of the program, nearly thwarted by his usual accomplice turned nemesis, Andrea Herman.

Because he spends most of his time with Heather figuring out how to make champagne and shackles pairings as awkward as possible, he rarely has time to iron his mock trial clothing. This has led to coach D'Ippoplito to dub him “the kid who always looks like he just got into a bar fight right after every trial” (or something like that).

Billy is so grateful to the mock trial program for giving him excellent friends, the realization that he really can’t act, and the everlasting pity of his favorite Delta flight attendant. In his free time you can catch him blocking out the sweater party, being a VP on student government, or infiltrating his second favorite club, the Duke Debate team.