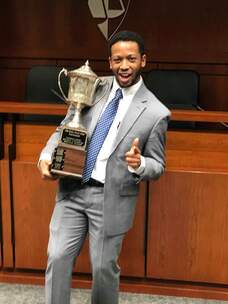 Christopher Meadows is a second year law student at Duke. He hails from Chattanooga, Tennessee and competed at Rhodes College, where he became the first black student to captain the program's "A" team and let them to two straight top 3 finishes at the National Championship Tournament.

In his free time, Chris enjoys watching and playing soccer. He also enjoys Chipotle, but not nearly as much as Eric Roytman. His favorite show is Arrested Development.
Powered by