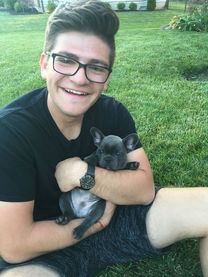 ​Eric is a 2L at Duke Law. Born in the booming metropolis of Dayton, OH (the REAL birthplace of flight), Eric has always had a passion for public speaking. After competing in speech in high school, Eric joined the mock trial team his freshman year at The Ohio State University. From the very first tournament weekend (which featured a fake mustache falling off of his face during trial), Eric fell in love. In his four years in AMTA, Eric led OSU to their first two Top-10 nationals finishes, and took home two All-American attorney awards along the way.

​Though he went to Ohio State, Eric’s favorite sports team is his hometown Wright State Raiders men’s basketball team (they’re on the rise). He eats Chipotle 3-4 times a week, and considers Nicholas Cage’s performance in National Treasure to be the single greatest artistic achievement of the 21st century.
Powered by