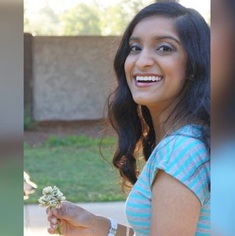 “Hi, I’m Riya Dange. That’s spelled like ‘Danger’ – without the R.” That’s how Riya typically introduces herself to bad spellers, mnemonic fans, and Mock Trial judges.  At an intimidating five feet tall, she certainly fits the description of “dange”-rous. Unlike Lord Farquad, though, she doesn’t intend to be eaten by a dragon.

Sometime in August 2015, she decided that it would be both educational and entertaining to pretend to be a lawyer on Duke’s Mock Trial team. Inspired by an impressive Craigbot and some mad PowerPoint skills, Riya tried out for the team and never looked back since.

Outside of Mock Trial, Riya writes fiction novels, sketches eccentric characters, and composes random sarcastic comments. She also has a particular fondness for Harry Potter, Pride and Prejudice, Lord of the Rings, and all things Disney. Someday, she hopes to be as swift as a coursing river, with all the force of a great typhoon and all the strength of a raging fire, mysterious as the dark side of the moon.
Powered by